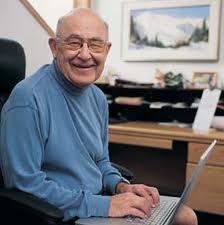 Biography:  Donald Graves was known as the father of the process approach to writing.  He inspired and influenced many teachers, researchers, and writers all across the world.  Donald Graves dedicated his life to help all children, in particular, children with learning disabilities to improve their writing skills.  He was born on September 11, 1930 in Fall River, Massachusetts.  In the year 1952, Mr. Graves received his bachelor’s in English from Bates College.  After four years of serving in the United States Coast Guard and a few years teaching in an elementary school, he obtained his master’s in Education from Bridgewater State College in Massachusetts.  He then began a new career in education ministry at the Hamburg Presbyterian Church in New York.  Finally, in 1973, Donald Graves received his doctor’s in Education from the University of Buffalo in New York.  He dedicated the rest of his life to teaching, mentoring, writing, and researching on how to improve children’s writing.  Unfortunately, after countless years of serving in the teaching, researching and writing profession, Donald Graves passed away on September 28, 2010 in Falmouth, Maine.

Theoretical Orientation: Major theory:  Donald Grave’s major theory was “The Writing Theory”.  Donald Graves created The Writing Process that is most commonly used in the school system.  The Writing Process is composed of five stages.  The five stages are the pre-writing stage, drafting, revising, editing, and the publication stage.  In the pre-writing stage, writers begin brainstorming to gather and organize their ideas.  In the drafting stage, writers begin the 1st draft of their work.  The revising stage allows the writers to review their work in terms of content.  In the editing stage, the writers look back on their work, looking for spelling and grammatical error.  Finally, the process ends with the writers publishing their work.

Major Study:  Mr. Graves had conducted studies of children’s reading and writing since 1972.  His main interest was helping children with learning disabilities succeed.  He believed all children were able to write if the teacher teaches most by showing how he or she learns, and he or she has a highly structured classroom. In 1976, he continued to research on how to help students develop their writing, and as a result, he founded the Writing Process Laboratory at University of New Hampshire.  He remained at the facility until he retired in 1992.  As a result of his inspiration after his research with elementary children at Atkinson Academy, Donald Graves wrote and published his 1st book in 1983, entitled, “Writing: Teachers and Children at Work”.

Major Strategy:Donald Graves never had a doubt that all children could write if they were given the proper guidance.  He strongly believed that students could become better writers through the teaching of the writing process. Graves (1985) “The writing-process approach to teaching first emphasizes what children know, then the conventions that will help them share their meaning with others in the class”.He made his point that a strong writing program must be composed of four (4) components.  The four components of a strong writing program are as follows:

1)      Adequate provision of time – Students need to write at least 4-5 times a week to see changes.  Teachers must give students opportunities to write often to see progress.

2)      Child choice of topic – Students will choose topics.  They need to choose topics that they know something about.  By doing this, it will eases their worries about writing.  It will also help the children to write with a load of different ideas.  Once students are offered the opportunities to choose their own topic, they are near the heart of success in writing.

3)      Responsive teaching – People write to share with others.  Writers need audiences to listen and respond to their writing.  By responding to the activity, the writer begins to sense that the text fits his or her intention.  A teacher needs to confirm what he or she understands in the text by asking a few questions.  By doing this, it will help writers to start to listen to their own writing.  They will have a better feeling for themselves,and they will start to value their writing, and above all, they are going to want to write more.

4)      Establishing a classroom community – A highly predictable classroom is just what children need to foster a classroom of friendliness, healthy attitudes, and to take on responsibilities and become a community of learners who assist and support one another.

Donald Graves encouraged teachers to help students by setting examples to lead the way.  He encouraged teachers to write themselves to get students’ motivation up and going.  NWP (2010) Gravesquoted, “if you are not doing it, hey, the kids say, I can’t wait to grow up and not have to write, like you”.  Graves (1993) stated that children can write authentically if we help them.  All they need is a little jumpstart of motivation to get them going.  And who is the best person to demonstrate that in the classroom?  By writing, we, as teachers, are doing ourselves a favor.  Everyone in this world needs writing as a survival tool in this very complex world.  NWP (2010) Graves indicated that the wonderful thing about writing is that it separates the meaningless and the trivial from what is truly important.  We need writing for ourselves and of course children need it as well.  Once children witness teachers in the process of writing, they will begin to develop that strong sense of imitating the teacher.  And once they start imitating the teacher by writing, they soon will develop the love of writing.  After all, teachers need to invite students to do what they are doing.  You can’t ask someone to play a game of tennis with you until you know how to play the game yourself.

As is typically the case, the above work by Donald Graves were imprints of success to the world of teaching, writing and researching.